Sadly, today was already the last day of our journey, it was spent travelling back home to Switzerland. We took the Eurostar train back to Paris from where we got on the TGV home. We talked a lot, played some games, or slept. Perhaps some dreamed about the amazing things we were able to experience throughout the past week. Others talked about the fond memories they made on this trip and their future plans which might have been inspired by some event that has taken place this week. We are extremely grateful for Roche and science on the move for this truly incredible experience which brought our class even closer together. Now we can look back on this week as a happy memory that we will never forget. Thanks for the opportunity we got, it was incredible! 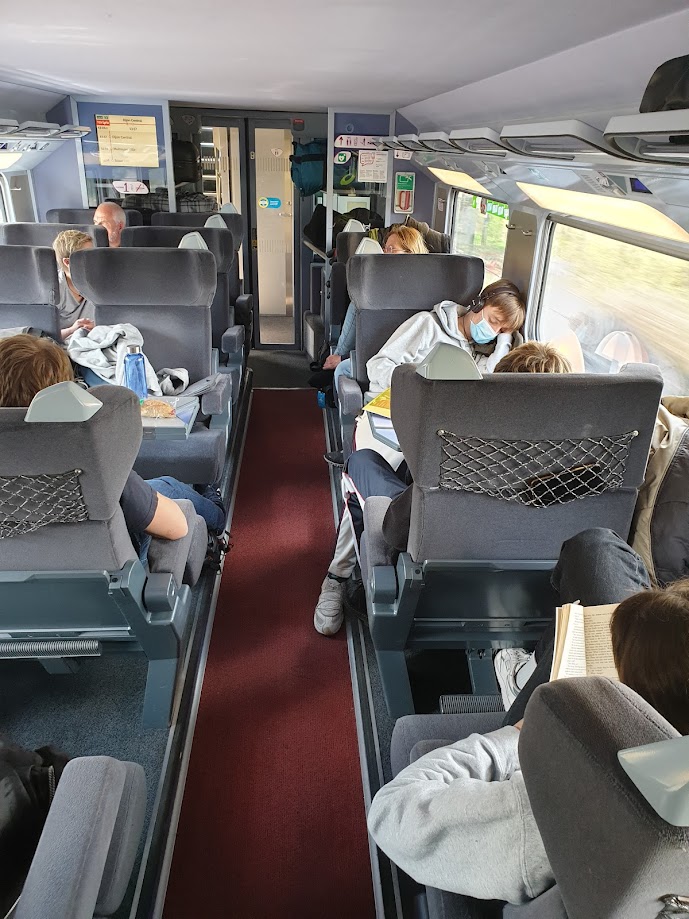 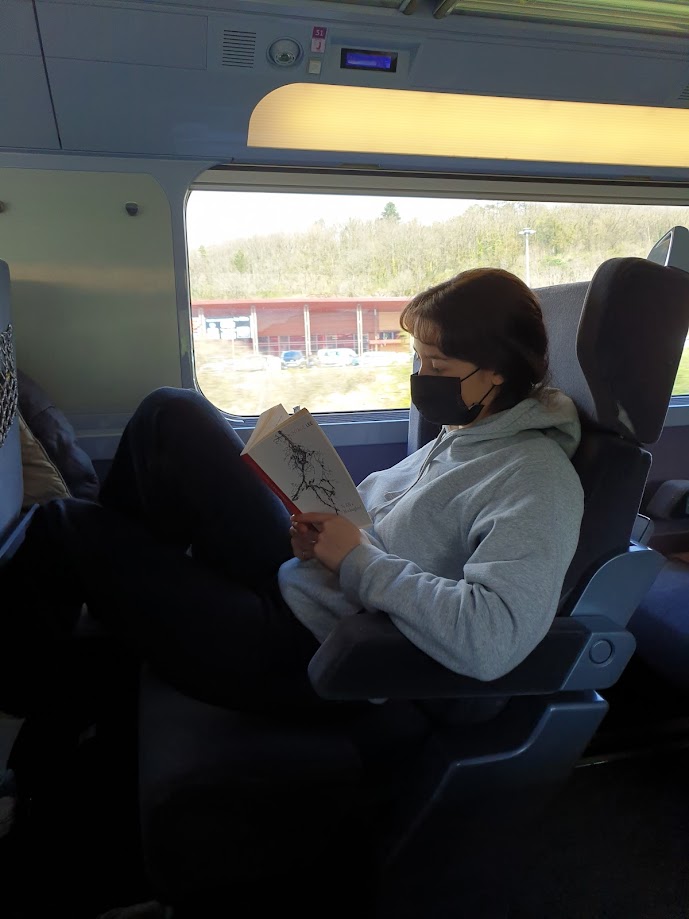 In the late breakfast we made our way to the Natural History Museum, where we were greeted by a gigantic whale skeleton.  After that we split in different groups and we made our way to the mineral section where we were presented with hundreds of beatiful crystals, metals and other shiny rocks. There were also tons of skeletons and replicas of different creatures including dinosaurs. Another interesting section of the museum was the history of the earth and its change through history. 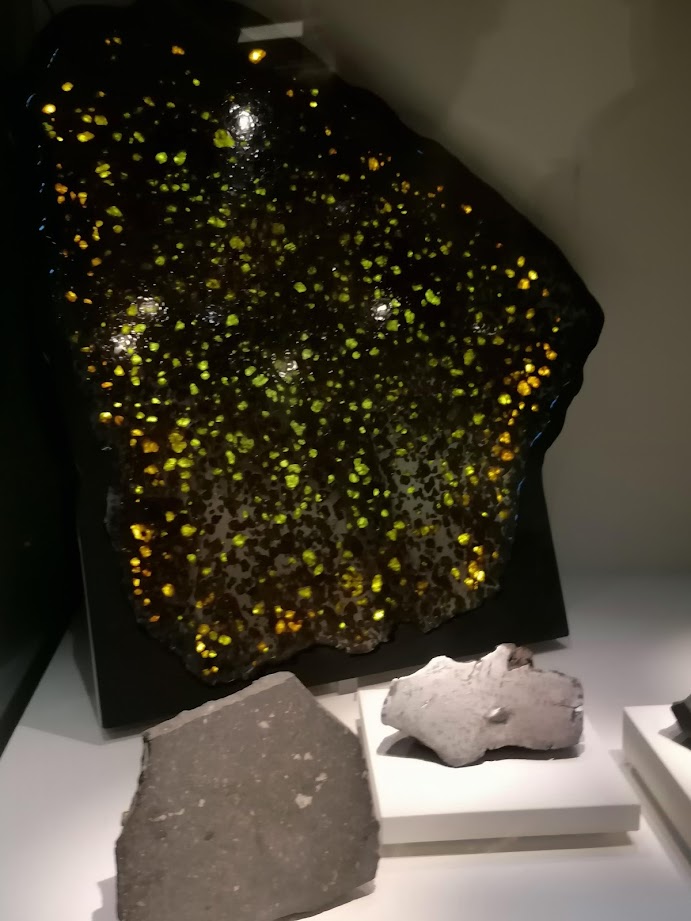 In the evening we went to watch the lion king musical. We can say that it is depecting the source material as good as possible and it is a wonderfull experience. The stage itself is working magic and the actors voices and singing is on point. Truly magical, 10 out of 10 would recommend. 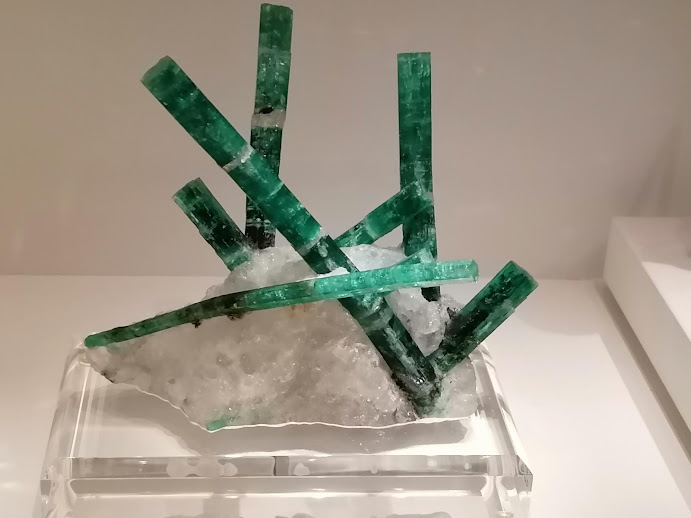 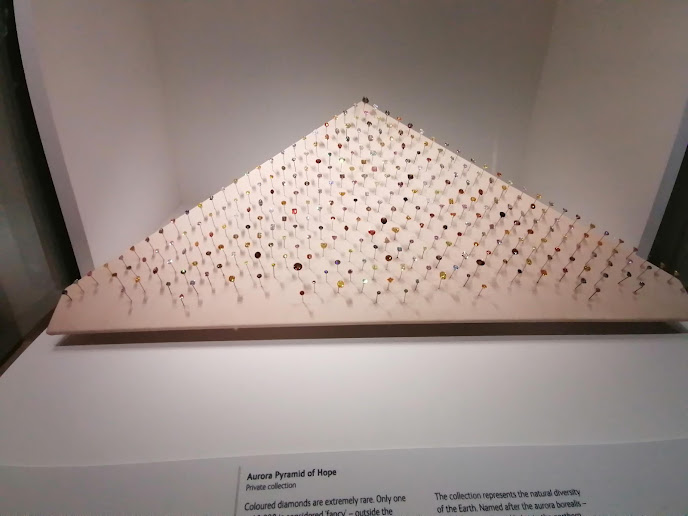 Visit to Roche UK in Welwyn 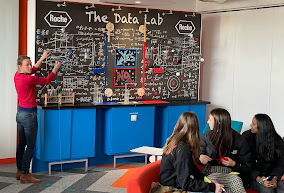 This morning we met at 8:20. We then all got into our bus and made our way to Shirepark to visit Roche UK. We were met by pastry, drinks and British students. After a warm welcome and introductory presentation by Mr. Ralph we split into two groups who then each had their own workshop. On the one hand, we were introduced into statistics in the form of clinical trials for headache medication and on the other hand, we learned about the process of approving new drugs. 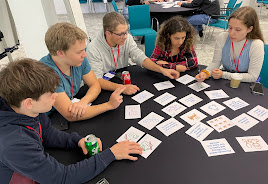 We then ate pizza for lunch and socialized with the british.

After lunch we had a general introduction into neuroscience by Hannah Critchlow. It was extremely interesting we were presented with fascinating insights into a topic we did not know much about previously.

We then had 2 more workshops. One was about our brain waves and how we react to 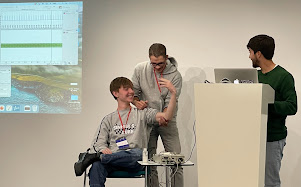 being shocked. The other workshop was about traumatic experiences and how to treat them.

After the workshops were done, we had a quick break and then got another introduction into the cloning technology of today and how it can be used to heal people. 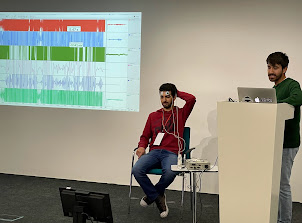 We then hopped into the bus again and drove to Tewin Bury Farm where we ate dinner and spent time with our new British friends. All in all it was a wonderful day with lots of inspiring impressions.

We started our day with a bus drive to the L’Oréal Young Scientist Centre in the Royal Institution where we could experience an interesting workshop in forensics. After a short introduction we put on our lab coats and gloves and we were ready to start. We were part of a forensics team that had to investigate in a crime scene. A man got murdered by being hit with a shovel and there were five suspects. Two types of DNA were found on the shovel, one was the DNA of the victim and the other DNA was unknown. We received six samples, one with the DNA on the shovel and the other five samples were DNA of all of the five suspects. By means of gel electrophoresis we tried to investigate all of the samples to later decide, who’s DNA was on the shovel and who therefore was the potential murderer. We learned much about forensics and it was very interesting. Also, every group found out who the murderer was, meaning that everybody did a great job. 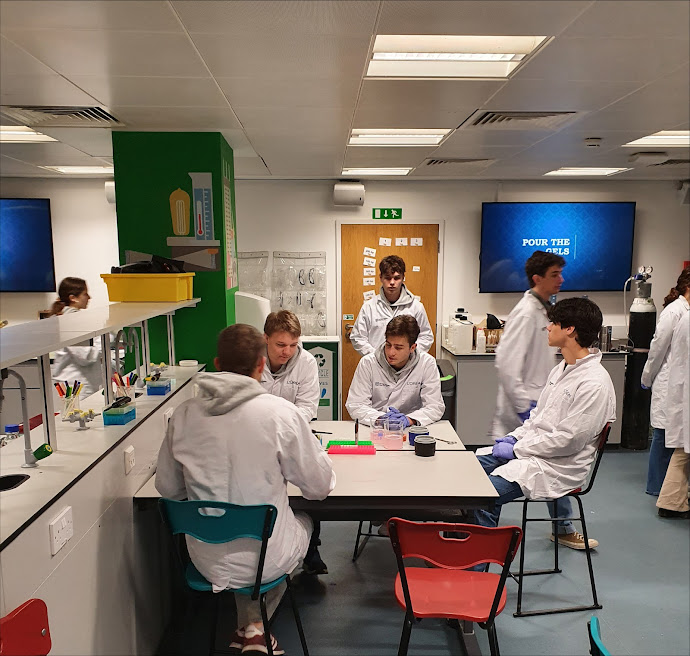 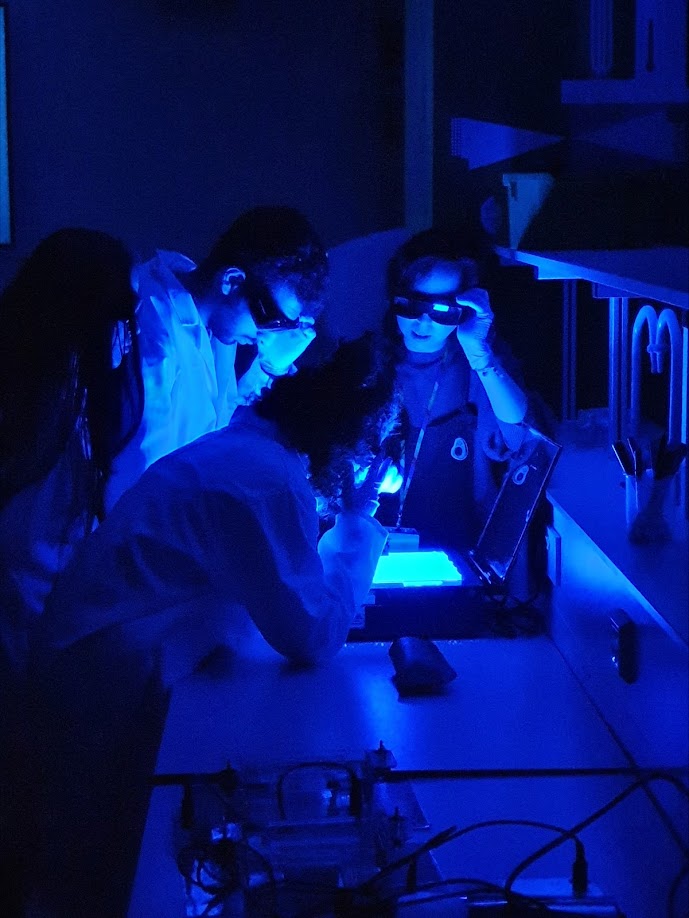 We then got to enjoy a delicious lunch at the Swiss embassy today before meeting the Swiss ambassador and his colleagues. They presented us their work and provided insights into their life as diplomats. We for example learned about diplomats changing their location every four years and how one becomes a diplomat.

Richard Erwin from Roche UK also joined us at the embassy and told us a bit about Roche in relation to simply science. 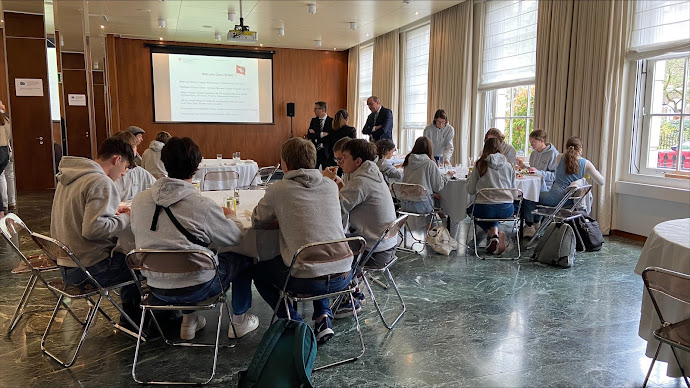 Then we got to present our project „Biodive“ at the embassy; a great opportunity! Talking about the science-on-the-move-competition and about the process of developing our idea definitely brought up many good memories. It was an awesome chance to get to present our model today and although there were some technical difficulties during the presentation, we mastered it as a team, as we always do.

Afterwards we got to talk to the embassy staff with a cup of tea or coffee and also ask them our personal questions.

After an afternoon at the embassy we got to enjoy some free time and explore london on our own for a bit. Some of us wandered reagant street whilst others explored the arab quarter of london or went to visit buckingham palace.

To round off the eventful day we had dinner at a restaurant called „Avocado show“, serving exclusively food containing avocado: A special and very delicious experience! 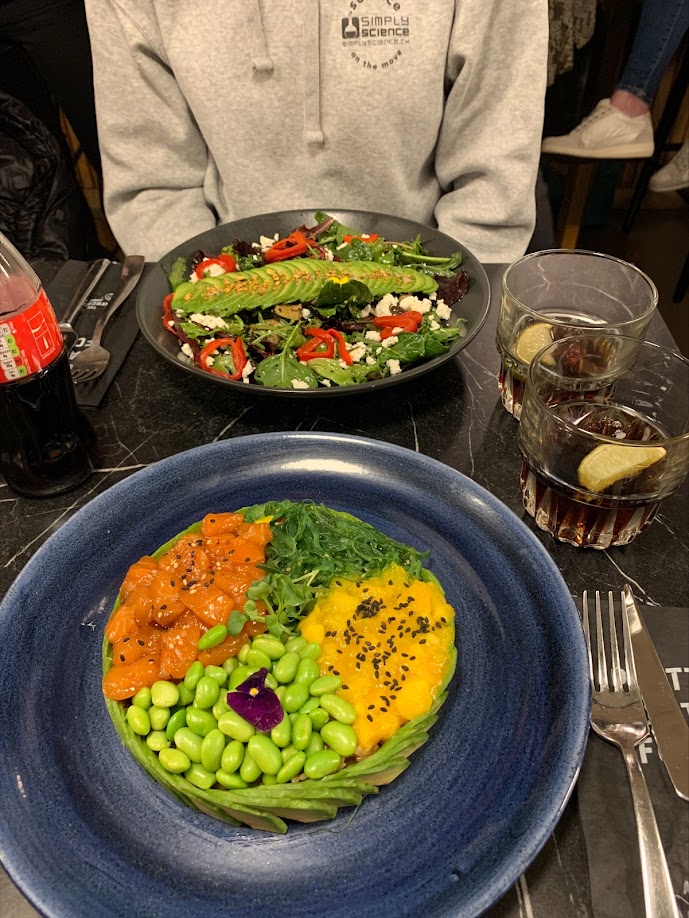 Although the proud winners of the simply science project had to awaken earlier this beautiful Tuesday morning, and had a long, two-hour bus journey to the campus of Cambridge, it was definitely well worth it. 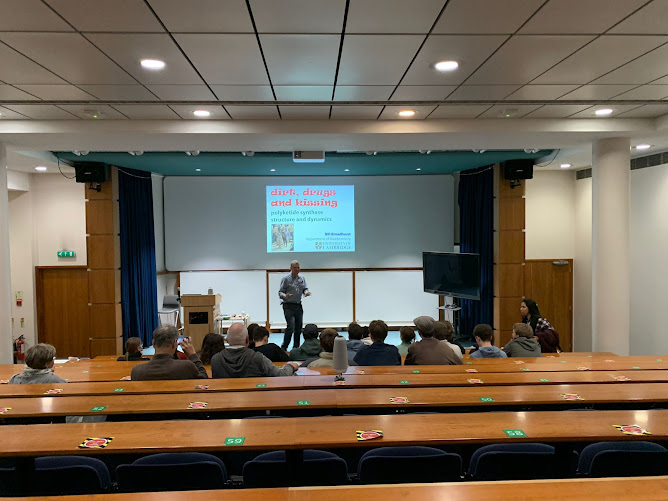 The morning started off with a brilliant lecture in the biochemistry faculty building, where Bill Broadhurst, a professor at Cambridge, talked about a discovery of his (along with several other colleagues, of course). The lecture was titled "Dirt, drugs and kissing", and contained various interesting information about antibiotics and was followed by a short overview of Cambridge generally and admission possibilities for the science sector. 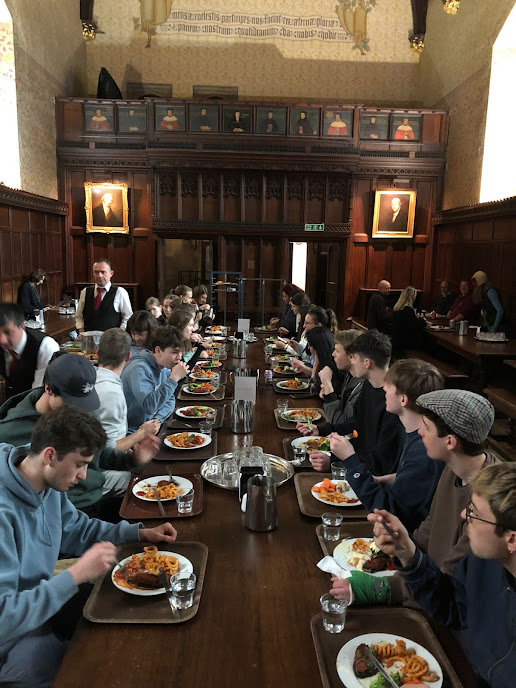 After that we ate lunch at the beautiful St. Peter's hall. The food was delicious, the line to the bathroom was long, but supplied us with several versions of a fun group picture. 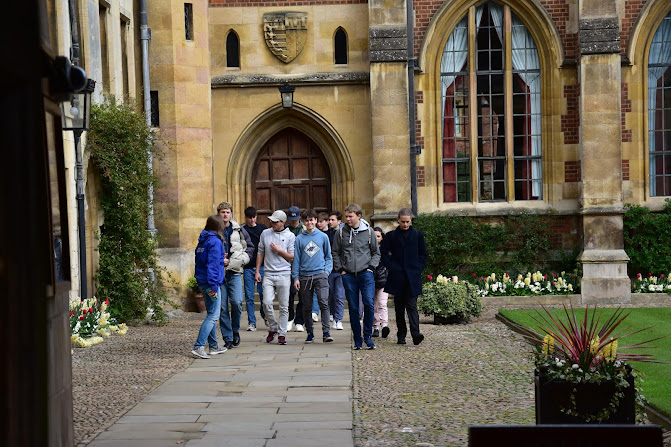 After lunch we embarked on a long, informational walking tour, led by a Hungarian, second-year student, who told us of, amongst other things, the perils and struggles of the female student. As we learned, the last college to accept women into their curriculum and give them access to graduation at all, did so in 1988. The students at the time, all men, held a funeral concession to mourn the "death of education", as they assumed it would inevitably be threatened by the presence of women. 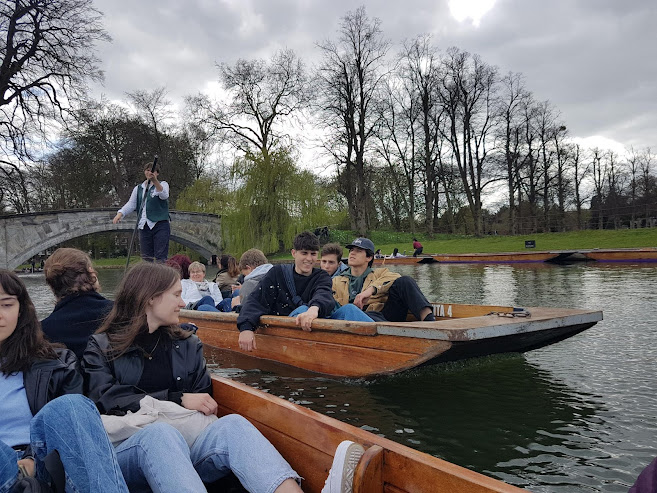 Although our qPCR workshop was unfortunately canceled, we were able to experience a lively boat tour, or punting as the English call it. We saw the various colleges from a new perspective and our three guides were university students themselves, and were able to answer our individual questions. 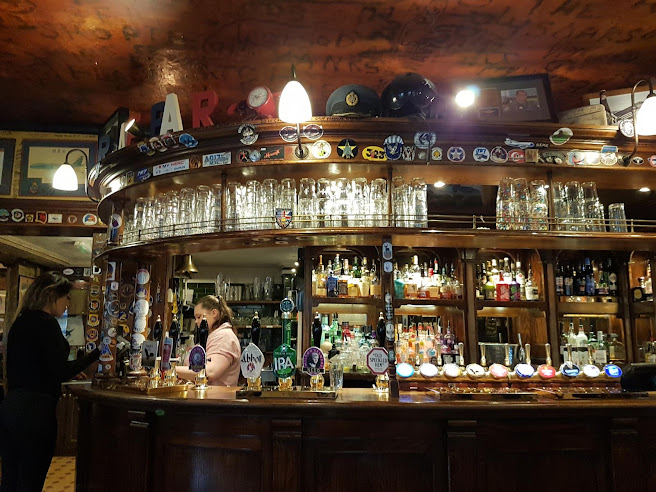 Even though we had free time, most of the students opted to accept the kind offer of a drink at the famous The Eagle pub. It was in this pub that the amazing discovery of the double helix DNA-strand was announced with the words, "we just discovered the secret of life".
The day ended with a delicious meal at the Olive Grove, a Greek restaurant. Although there was more than enough food to go around, it was perfect for the cherry-on-top of a wonderful day at cambridge.
And we give many thanks again to roche and the organisers of the science on the move trip for such an amazing itinerary!
um April 05, 2022 Keine Kommentare:

In the morning we were very heartily welcomed by the Roche staff. Afterwards we headed altogether to the old Operating theatre, which is just a stone's throw away of the borough market. There we learned about the operating methods during the 19th century. Since there was no anaesthesia during that time, the operations had to be very quick. On average 5 to 10 min. Additionally only one out of three patients survived surgery, which was considered good at that time. The most common operation was the removal of bladder stones. But the highlight was when the amputation procedure was demonstrated on Seraina. Afterwards we could take a look at the museum where we discovered more old operating tools and cures.

Then we headed to the platform gaming centre. Here we ate delicious pizza and played a wide range of games. We mostly enjoyed playing Mario Kart in small groups. In addition, we also got some insights into developing a start-up directly from the founders of the place.

Then in the afternoon we had some free time to spend in the city. Our group visited the garden at 120, which is a public garden on the roof of a building. From there the view was stunning and we could see most of London's landmarks.

In the evening we had a delicious dinner in Chinatown. The dinner had something for everyone and was very rich.

The journey to London was divided in two groups. The bigger part of the students traveled by train. From St. Gallen to Zurich, from there to Basel and then into our neighboring country France. In Paris, they had some time to wander the streets of the city and get something to eat or maybe a souvenir. Then, they hopped on the Eurostar, went underground and surfaced again win the United Kingdom. The other part of the students took a more direct route, they flew to London from Zurich without making a detour to France. When we all got together at the hotel, we went to Bloomsbury Bowling and tried to get a couple strikes. All in all a very successful first day. 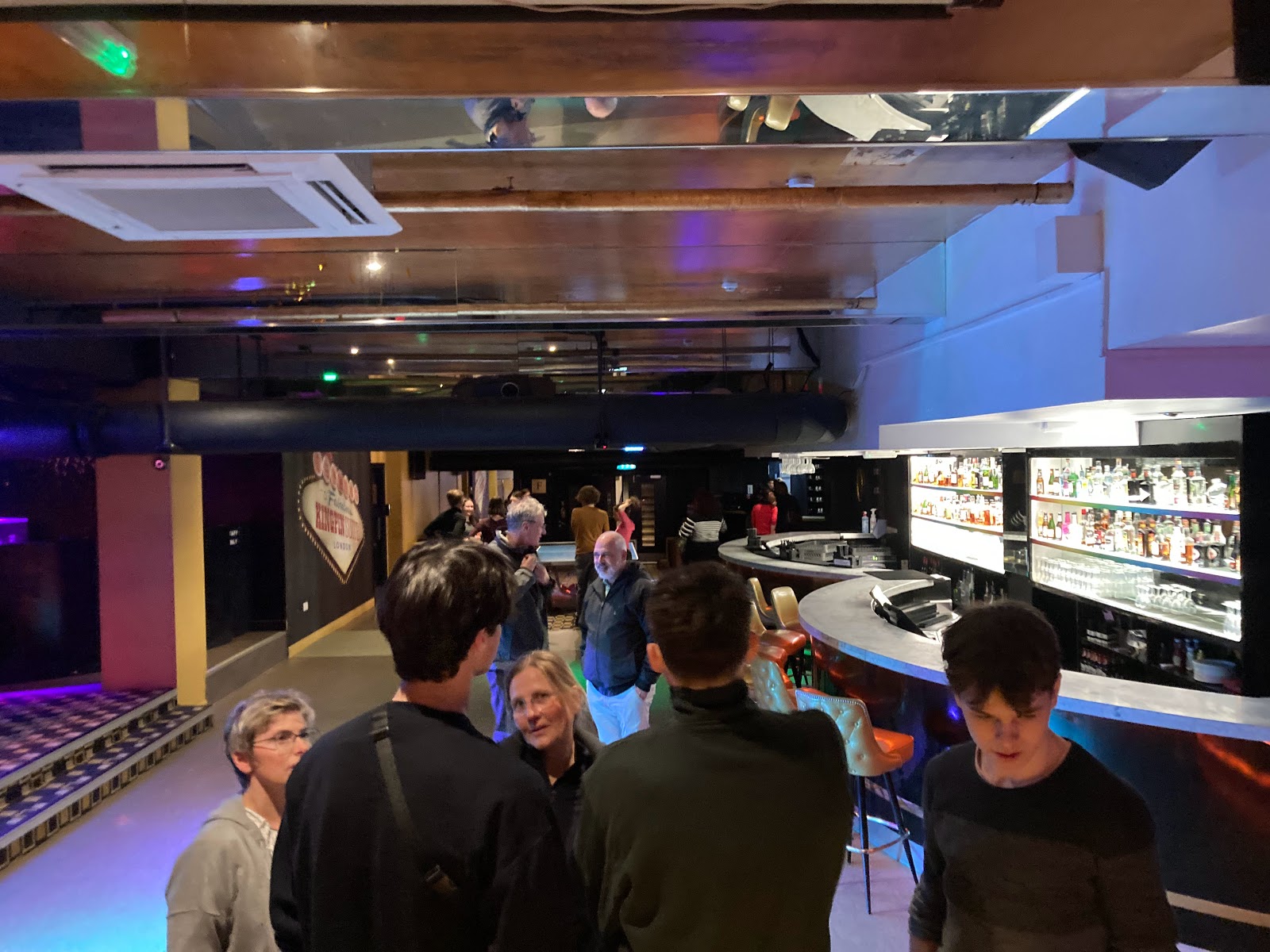 Class SF5 BC from Kantonsschule Trogen has won the first prize in the Science on the Move competition 2021 – a science week in London and Cambridge. For a long time it had been uncertain whether the trip would take place. A lot of flexibility was asked from the students, their teachers, the school and the organisers of the science week. But now we are quite confident that class SF5 BC will be boarding the train on April 3rd, 2022! The students will be posting here their impressions and experiences during their trip. We are looking forward to it!

About Science on the Move 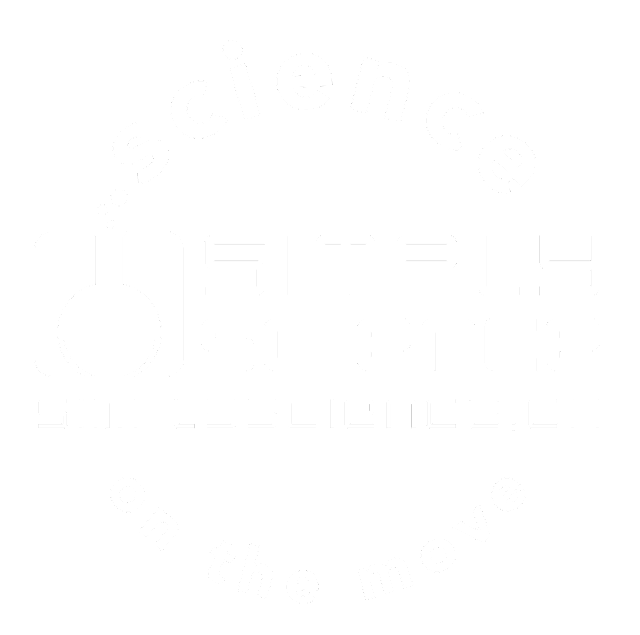